Let me just start by saying that THIS IS HUGE for the NFL…and even more so for Twitter. 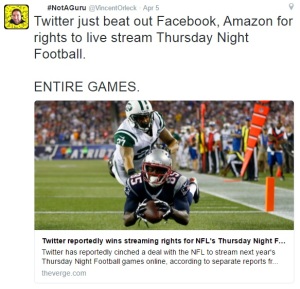 Yahoo actually kicked things off in the digital live streaming world last season with a game between Buffalo and Jacksonville that they paid $20 million for, and that did ok but apparently didn’t have the same retention as a typical NFL contest. I don’t think it had as much to with the live stream itself as it did with the teams that were playing and the time the game was shown here in the states. Sure, some people may not have had the ideal quality of the broadcast due to varying internet connections, but this new deal will test all of those aforementioned potential reasons.

The games will be shown each Thursday night. Previously the league had only made those specific games available on their NFL Network and then over the last couple of seasons moved them to a mixed broadcast with CBS. The games themselves typically end up being some of the worst of the week, but many believe that’s due to the shortened week for the teams and players to recover in time from the Sunday before. Another factor is that both Sunday Night Football and Monday Night Football broadcasts have the opportunity to choose their specific games ahead of time, meaning they get the pick of the litter, at least on paper, prior to the season start. There’s also the “flex” games that happen later in the NFL season which SNF directly benefits from.

SO WHY IS THIS SUCH A BIG DEAL?

They will now be the recipients/beneficiaries of a huge surge in potential ad revenue. Brands will flock (ugh I know sorry) to the platform for the opportunity to market to their audience during a live event. At this point its understood that live sports and entertainment (mainly NFL, NBA, MLB, NASCAR and even 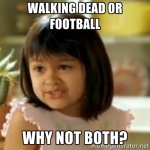 WWE alongside appointment-viewing shows like The Walking Dead) offer some of the best advertising opportunity, at least on television.

All we’ve heard for some time now is about how Twitter’s user growth has slowed to a crawl or even stopped, and how investors are so worried about it. Personally that didn’t seem like the be-all, end-all to me only because I thought they needed to focus on the DEPTH of their users, rather than the WIDTH (h/t Gary Vaynerchuk). There’s a real need to educate even existing users on how best to use all the platform features.

Not that the NFL needs any more exposure BUT this does make at least one game per week WAY more accessible. Basically anyone with a mobile device, the Twitter app, and a wifi connection will be able to watch the game. And you have to believe this will only lead to more and more access. The NFL does offer games live streamed through DirectTV but you need to be a subscriber in some way. I wouldn’t be surprised to see a monetization model in the future where users would pay a small subscriber amount to watch games through Twitter.

One thing I’m definitely curious to see is, what exactly will Twitter stream? Will it be the broadcast from CBS and/or NFL Network? And even if it starts out as that, could we eventually see a Twitter-only broadcast booth? (If that happens I’m crossing my fingers for Gus Johnson to do play-by-play) 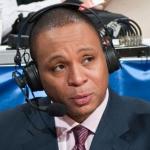 No matter how it plays out, count me in as someone who is a Twitter and NFL fan that is excited to have another way to easily access regular season games. As much as I disagree with a LOT of things the NFL does (did I mention I’m a lifelong Patriots fan?), I strongly believe its a very solid and progressive move. And for Twitter its not just a game-changer, but a game CREATOR. Between owning Periscope and this further developed NFL partnership, Twitter can say they’re leading the way in the live streaming space.